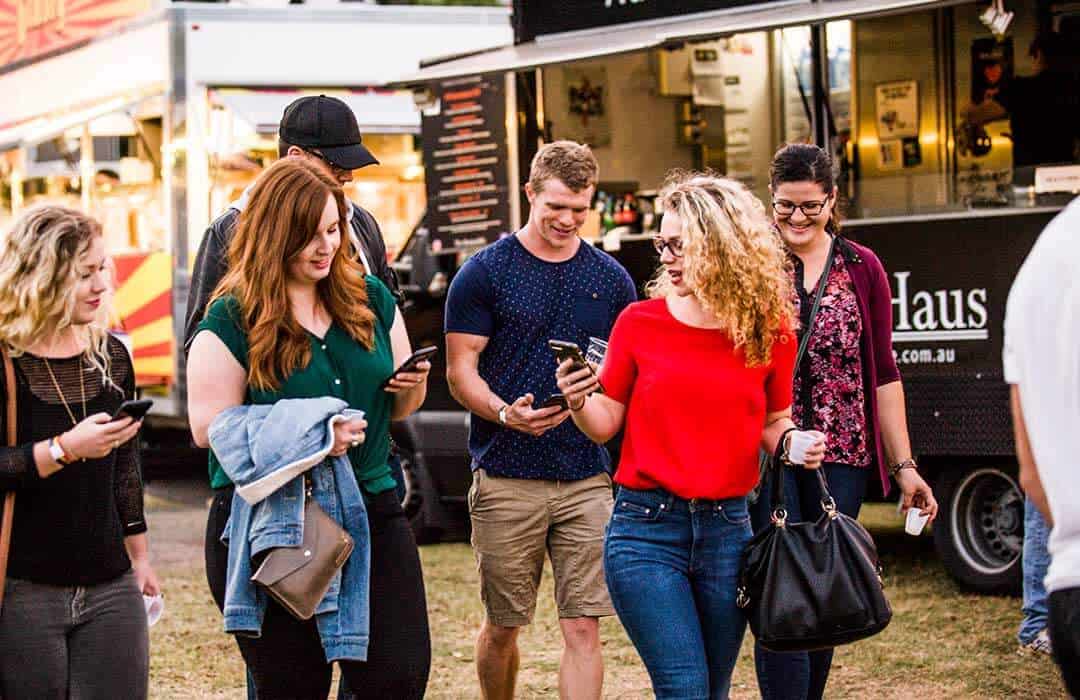 Cash for Connections: How to make money from your event WiFi

Internet connectivity is the life blood of cloud-based technologies. Outages can be so disastrous that managed internet for events is a given in most modern event budgets. Event creators who need to be sure their registrations kiosk, POS terminals or ticketing apps work know this simple fact: nothing works if the internet doesn’t. In today’s post we’ll show you how to figure out the spare capacity you’re likely to have on your event WiFi network so you can get out there and onsell those connections to sponsors and guests.

Hiring temporary managed internet can get costly, depending on the size of your event. To keep costs under control, most event creators opt to stick with providing managed internet for the essential functions and don’t choose to add a guest WiFi network. The good news is that there’s a strong chance that your existing production internet hire represents an untapped goldmine – the spare capacity on your network. Even if you just hire the coverage necessary to run your event, every connection you’re not using for essential event functions can be onsold, either to a sponsor or directly to users via a payment gateway.

While some event WiFi can run using one access point with ease, others such as festivals and conferences, usually need multiple points around a site to ensure the internet coverage is rock solid in all the important areas. Each access point can handle multiple users at once, for example, the PopUp WiFi Express can connect 100 users at a time, so even when all the production devices are on the network, this will often leave many connections unused. So what do you do?

The first step is to determine the physical distribution of your mission-critical devices. Think about the critical devices at an event that rely on internet connectivity to function. For example, the ticketing scanners at the gates, the POS terminals for bars, merch and food outlets and the laptops in the site office. They all share the main characteristics:

Let’s take Fictional Fest 2021 as our example. It’s a small 3-day festival in a regional setting, with music, food and camping. Fictional Fest is staged in an area with minimal 4G coverage on most carriers. The local towers are likely to be overwhelmed when 7,000 fans show up, so the Fictional Fest team have brought in PopUp WiFi to make sure their production internet works the way they need it to. When we count up the number of connections available on each access point in the key areas, the event will have a total of 1,500 connections available, but only 494 of those will be used for essential production functions. This is where your goldmine comes into play. 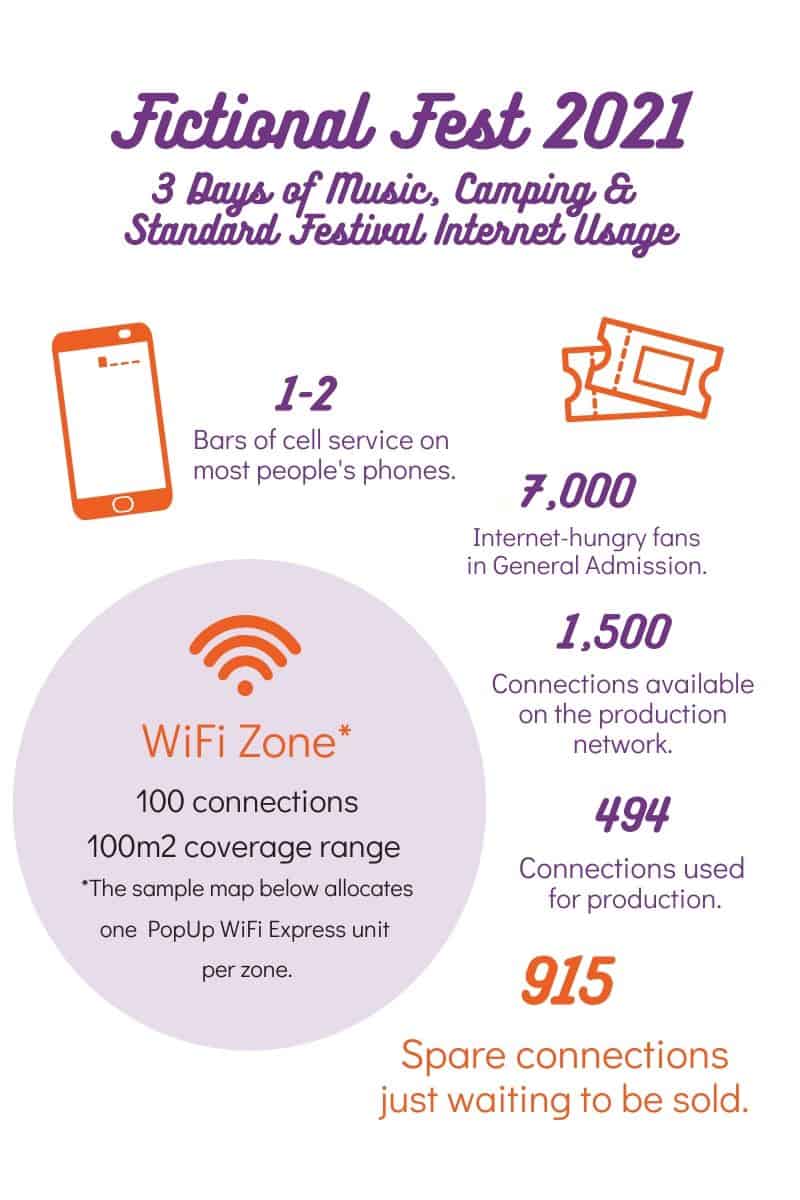 Like most event organisers, the Fictional Fest team have the usual roundup of important devices that absolutely must have internet access. They’re scattered right around their site, not conveniently clustered in one spot (it’s always the way at events). They have provisioned a  PopUp WiFi Express unit in each main zone. With a range of 100 metres, each unit has 100 active connections available at any one time, and there are 15 units across the site. Even if they have all production, vendor and VIP devices online at once, they will still be using less than one-third of the network capacity, leaving over 900 connections begging.

They aren’t the only ones begging – the ticket holders in General Admission will be gasping for internet access too. Here lies the foundation of your internet goldmine. With thousands of attendees’ phones clamouring for connectivity from the overwhelmed cell towers in the region, fans will be struggling to access even basic functions like email or social media on their phones. Those 915 connections have a great deal of value in this context because the fans need to communicate and will connect to a guest WiFi network to do so. The chance of selling that capacity to a sponsor, the vendors or the fans themselves is enhanced by everyone’s genuine need for WiFi access.

Some organisers worry that allowing guests onto their production network will compromise the performance of their critical devices, or present a security risk. Fortunately, a good network engineer working with recent technology will be able to configure your network so that guests don’t pose a threat to your security or smooth functioning. They will set up a separate SSID (network name) and password for guests and manage the amount of bandwidth available to the lower-priority (guest) network. Your priority production network should have an obscure network name and secure password to avoid any problems with access to the wrong network. Provided your network is expertly managed and is built from robust technology, you’ll be able to on-sell your spare capacity with confidence.

Here is how we did the maths to figure out how much capacity was available to be sold on the Fictional Fest network. You could apply this same method to any type of event you might be planning.

First, look at your event layout and mark where the event WiFi coverage zones for your production devices will be (we’ve provided a handy example below for our Fictional Fest example). Each event type is different, so try thinking your way through your event, area by area and work out where the critical devices are going to be, and roughly how many there will be of each device type and function. For example, at a conference, you might count the registrations area (scanners), the speaker lounge (presenter laptops), the live streaming production area (video production equipment) and the trade show hall (exhibitor devices).

We’ve marked each of the areas where there will be internet coverage with a circle. Each of these circles represents at least one WiFi access point with 100 connections and a range of 100 feet coverage. The purple circles are areas that the fans can access, the orange circles are AAA areas with restricted access only available to VIPs and artists. 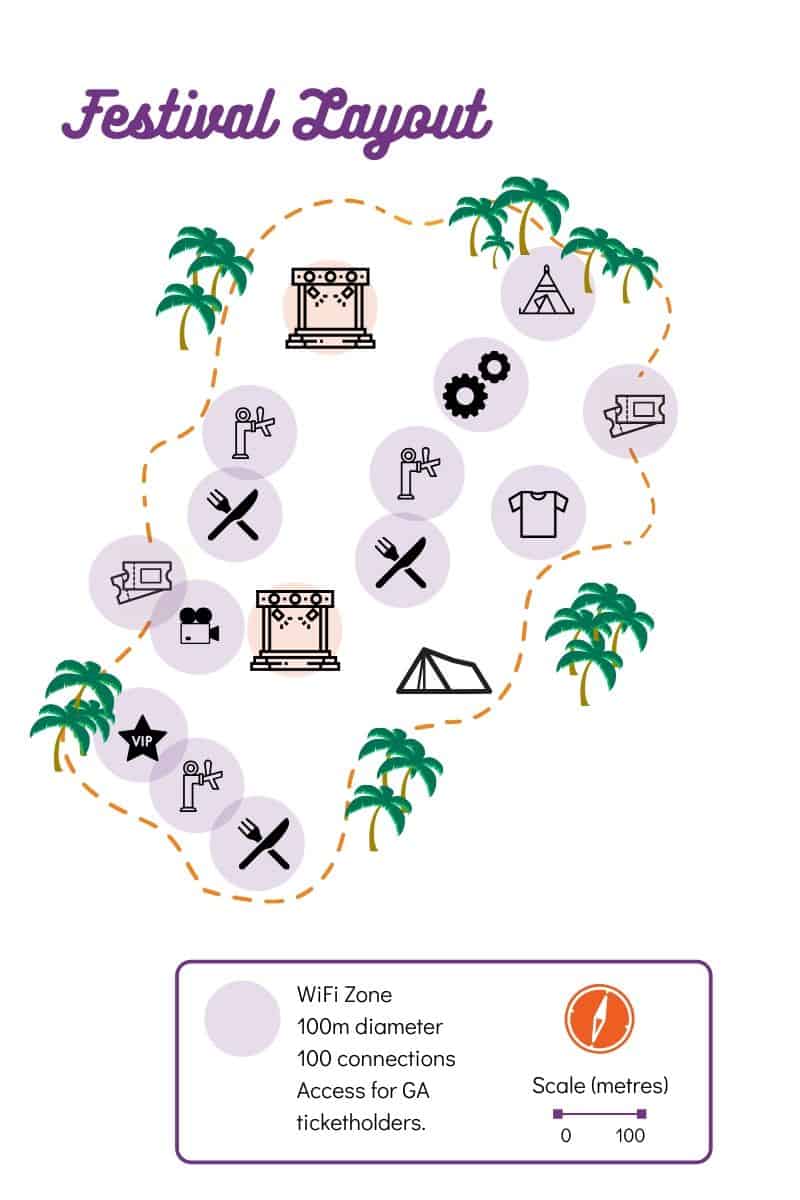 Once you know where you need your access points, what you need the internet for and how many connections you’re likely to need for each, you can start to map out your unused capacity as we’ve done below: 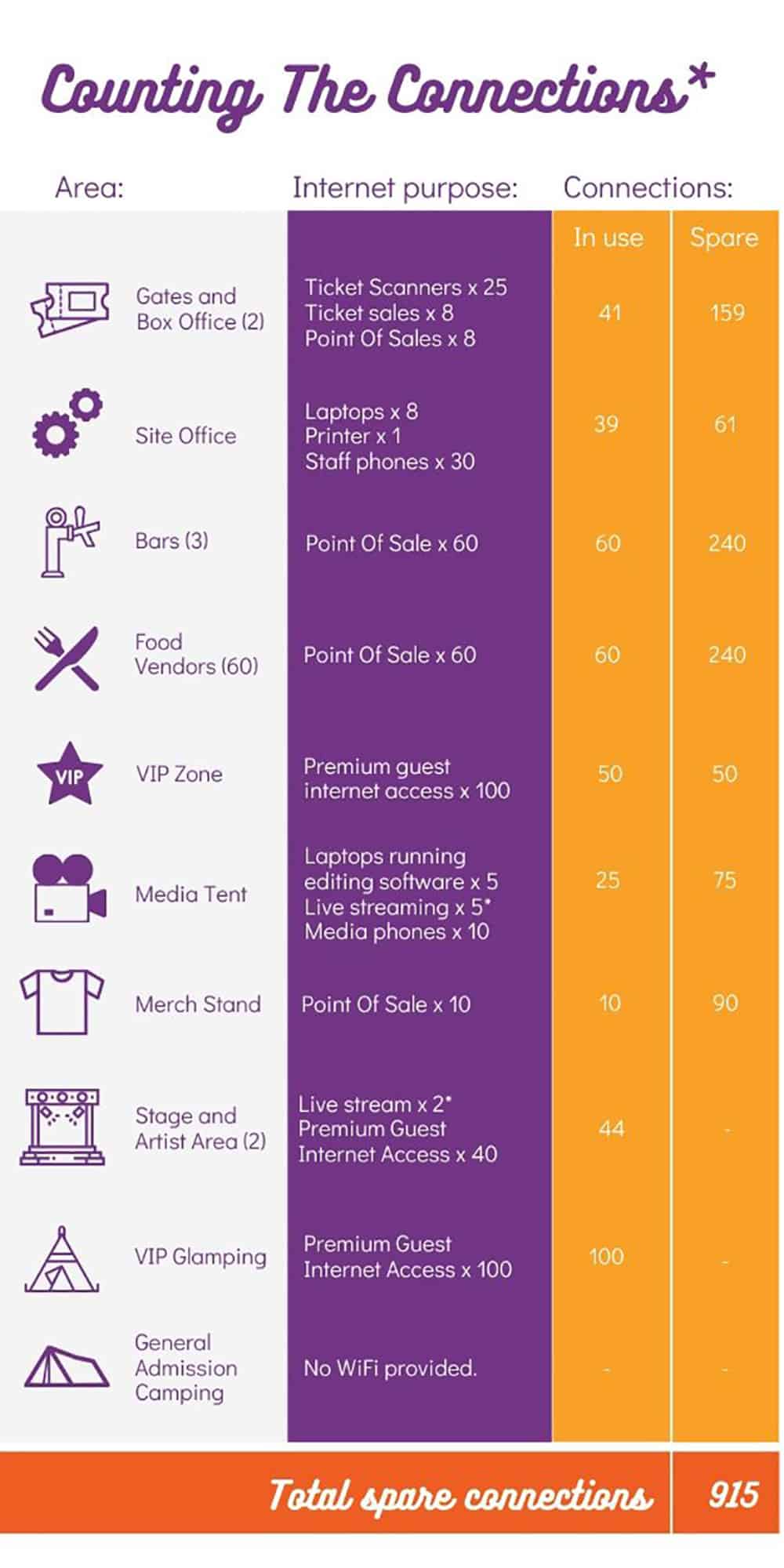 You’ll notice that we haven’t included any connections in the “Spare Connections” column next to the Stage and Artist’s Areas. Even though there will be lots of unused connections in that event WiFi zone, General Admission ticket holders won’t be allowed to access the backstage and artist areas, so they won’t be able to use those spare connections.

You’ve probably also figured out that in our calculations that we’ve allowed two connections per live streaming device, streaming in SD (Standard Definition – 480p) or 720p, typical of live streaming platforms like YouTube, Facebook and Periscope. Live streaming needs more bandwidth than any other function because devices are both sending and receiving video at the same time, so they need extra space on the network for smooth results. The one exception to this rule is if you’re broadcasting in 4K or Ultra HD – keep that internet zone exclusively for the stream and do not share it! High definition streaming is 4x greedier for speed than 720p, so the fewer devices connected to your streaming network, the faster the individual speed per device and the better the production quality of the stream.

And were you wondering about those data-hungry General Admission ticket holders at Fictional Fest 2021? They are sure to have an even better time at the event with the boosted internet facilities on site. They will be able to stay in touch, despite having just a single measly bar of reception on their smartphones. They will feel cared for by the organisers, who have obviously thought of everything they need, improving attendee sentiment. The fans will amplify the event message online via their social channels, generating lots of that original user content we’re all craving. All this, thanks to those clever organisers selling the surplus connections that would otherwise go to waste. Pure gold.

The need for solid production internet at events isn’t going anywhere soon, and the costs for connecting critical devices can start to add up. Wouldn’t it be amazing if you could sell your unused internet connections and pay for your internet at the same time? It’s not as crazy as it sounds. In the next few posts, we’ll show you a few examples where our customers have done exactly that – they’ve sold their spare internet connections to offset the cost of their production network. These event producers saw the opportunity to fully utilise the internet service they were already paying for by selling the unused capacity they were already paying for. Whether the buyer was a sponsor keen to make a connection with the fans, or the fans themselves, keen to connect to the internet purchased WiFi access, they all brought in significant revenue. By squeezing more value from their event WiFi hire, the organisers cut the cost of their production internet and brought cash flow in from an essential utility.