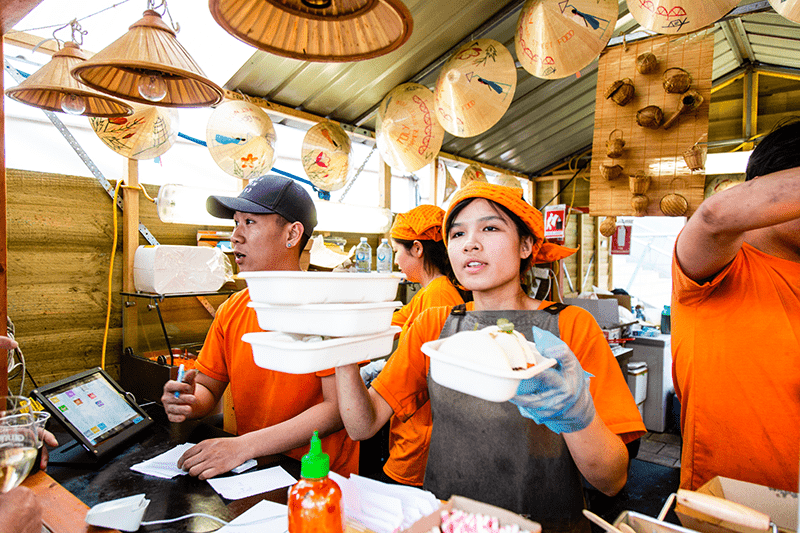 Producers can be quick to dismiss the idea that people would ever pay for internet access at an event because, hey, it’s not 2012 any more, right? Almost everyone has unlimited data on their phone plans these days, so what’s the point? That’s true, but sometimes the stars align and either internet access is important enough, or inaccessible enough that people at your event will pay to get online. In this case, adding a User Pays Guest WiFi network offers a way to bring in revenue and manage guest data consumption simply and affordably.  So, under what circumstances is it worth considering adding a Payment Gateway to your guest WiFi? Let’s start at the beginning.

User Pays Guest WiFi – what is it?

User Pays Guest WiFi is a way of managing a dedicated guest network by adding a Payment Gateway during the login process. Users connect to the wireless network by finding your SSID (network name) on their device, and when they attempt to access the internet, a Payment Gateway (sometimes called a Billing Splash Page) displays on their phone. The user then pays for WiFi access using a credit card. The event producer chooses how they would like to charge their guests for WiFi access depending on their objective. Users either pay for time online or for a certain amount of data. The producer sets the price at a rate that makes sense for the event context. Your network engineer will configure your network so that when the user runs out of time or data, they will be disconnected from the network. Most User Pays Guest WiFi platforms will transfer your earnings the following day after people have paid for internet access. 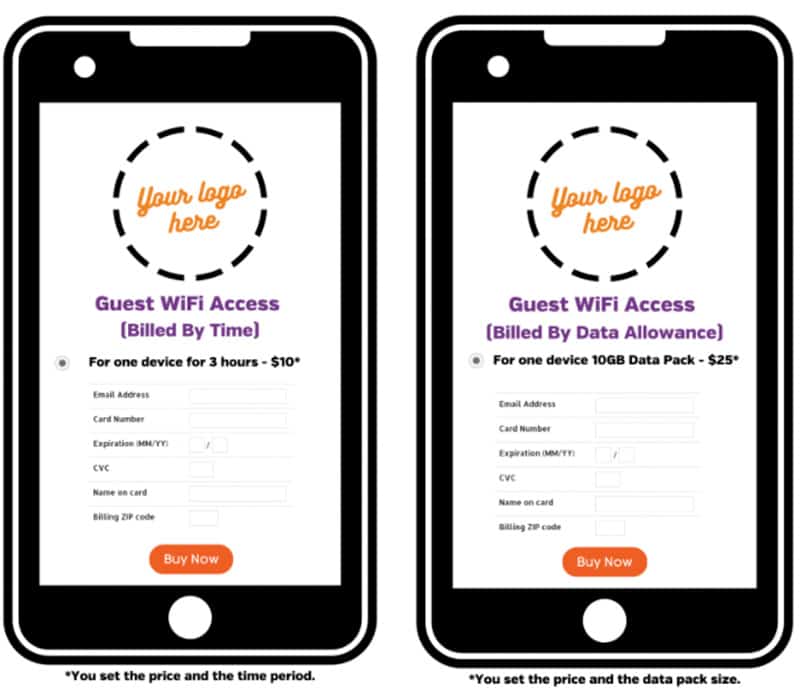 But surely no one pays for Guest WiFi any more…

On the surface, User Pays internet is just another way to get people to part with their money at an event, this time in exchange for accessing a WiFi network. It sounds like an idea that died with the last decade because Guest WiFi should be free, right? Well, not always. Adding a Payment Gateway isn’t always a scrooge-like manoeuvre, quite the opposite. The uncertainty of indeterminate data costs often (understandably) prevents event producers from offering a guest network at their event at all, because budgets are budgets. Adding a Payment Gateway can actually enable producers to offer access to production-quality internet to the attendees and stallholders who really need it.

User Pays Guest WiFi means you can offer your spare connections to attendees and vendors, without the fear of a giant data bill at the end of the show. It can be tough to budget accurately for the amount of data that people will use on a Guest WiFi network because you don’t know how many guests are going to connect or how much data each user will use. If you’re post-paying your event internet provider for data usage by the gigabyte,  you could be in for an uncomfortable dose of bill shock after the event. Adding a Payment Gateway to your Guest WiFi can be a proportionate way to balance expenditure on data with income.

This feature is especially useful for budget-conscious events like community fundraisers because it allows the organisers to offer Guest WiFi to attendees and vendors who need it without eating into the proceeds, which is something none of the participants wants to happen. By charging even a small fee, a Payment Gateway can offset the costs of offering access to your WiFi network.

Event organisers are not the only ones relying on access to reliable internet at your event. There are a couple of very important groups who are usually happy to pay for internet access – as long as it’s good (at least noticeably better than their phone or MiFi dongle). Stallholders, exhibitors and vendors genuinely need uninterrupted internet connectivity to do what they came to your event for – to sell. This valuable group of paying event stakeholders are often overlooked when it comes to internet provisioning, yet if their Point of Sale device isn’t connected to the internet, their cash flow stops. Poor internet performance can cost these types of businesses dearly in lost revenue and lost love from the people caught in their queues. For them, kicking in a few bucks for some internet connectivity is a no-brainer. Paid WiFi is far better than having no access due to budgetary constraints and shows that you’re thinking of your stallholders and vendors’ needs.

Some events actually choose to offer User Pays Guest WiFi exclusively to industry partners like vendors and internet personalities and their photographers. This ensures there is plenty of uncontested access on the network for the people who are there to make money and boosts the chances they’ll be back to buy a spot from you at next year’s event.

A surprisingly nice thing about Payment Gateways is that they charge by the individual device, not by the stall overall, so you can get a lot more granular in your billing. This means those smaller exhibitors and new entrants with only one or two POS terminals pay less for their internet connectivity than larger, more established stallholders who might have multiple POS terminals to connect. This nice equitable perk has to be tiered pricing at it’s best.

Another group of online businesses willing to pay for WiFi access are the increasingly entrepreneurial “influencers” and their entourages, who don’t consider internet access a “nice to have”. It’s a lot more like oxygen for them because they’re reliant on accessing quality internet for connecting with their followers, which is how they make their income. Whether they’re hosting a live stream, live-tweeting from a session or editing their photos for social media using cloud-based software, the cost of poor cellular connectivity to influencers could be heartbreaking. It’s certainly far more expensive (and embarrassing) for them than whatever you’re charging for WiFi access.

Sometimes no Guest WiFi is better than bad Guest WiFi

Events often open a free Guest WiFi network to attendees, both as a thoughtful gesture of hospitality and as a thrifty way to utilise any spare connections on their production network. (Find out more about that here). Sometimes it’s a perfect user experience. And sometimes it’s so frustrating that the better choice would have been to not offer free WiFi access at all and let people enjoy an offline trip down memory lane instead.

Adding a Payment Gateway to your Guest WiFi network will limit usage to those who need it enough to pay, even just a small amount. It limits the number of connected devices hanging out within the WiFi zone, unwittingly occupying a connection and clogging up the network. As people run out of time or data, their device will disconnect, freeing up the network for other intentional users to use. It all adds up to a great experience for everyone.

Are you wondering whether User Pays Guest WiFi is likely to work at an event you have in mind? Try out this decision tree and find out. 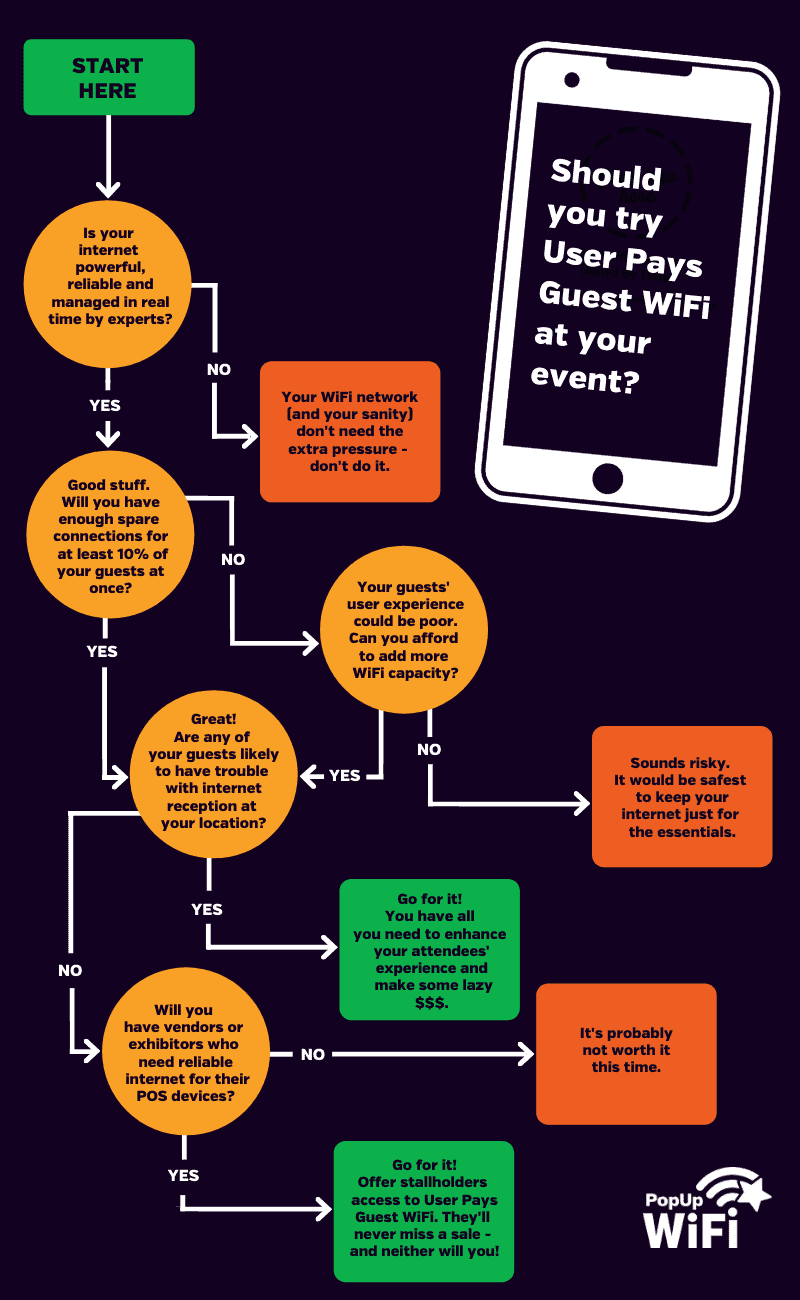 So whether people can’t access their own data on their phones due to the location of your event, or because there are just too many attendees, adding a Payment Gateway can let users pay up-front for their data usage. It’s a simple way to keep the fans happy while you keep your budget in hand.

Brian Cisneros is the Founder and Executive Producer of the scrumptious Northwest Chocolate Festival held annually in Seattle since 2008, to the delight of thousands of chocolate lovers and hundreds of exhibitors. They all travel from over 20 countries to the largest gathering of artisan chocolate makers in the world.

Brian created his amazing event to support producers from around the globe to develop sustainable supply chains that enable artisans and people from across the chocolate industry to bring their products to market.

More and more of his stallholders – but not all – were using mobile devices for their cashless transactions, meaning that the NW Chocolate Festival needed to get connected so those sellers could sell. The trouble was that the cost of providing vendor internet was not part of the original budget. It didn’t seem fair to increase stallholder fees, since not everyone needed internet access, but the increased cost of event internet needed to be met. NW Chocolate Festival first trialled a system of manually registering vendor devices on their production network, one at a time. This let them transfer the cost to the internet users directly. It worked, but it took a lot of labour to administer.

Brian partnered with PopUp WiFi to provide internet connectivity at 6 points spread across his event for production purposes, like registrations, ticket and merch sales. He discovered that he would be using fewer than half of the connections on his existing network, so Brian added a Payment Gateway to enable his vendors to connect to his managed networks.

“We added the payment gateway for vendors after careful consideration of the options. In the past we walked the show floor and signed people up by hand for WiFi services and then provided a unique access code. PopUp WiFi solved this for us by easily allowing vendors to access the WiFi payment window on their mobile device and self-register for the WiFi service. This feature saved us hours of labor and staff time.” 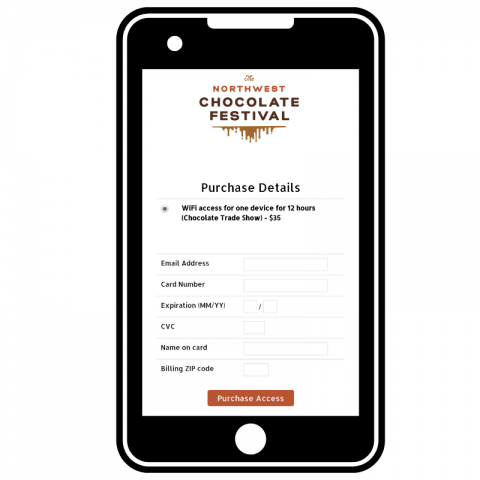 The internet service was smooth as that chocolate all those lucky attendees were buying. 61 stallholders purchased User Pays Guest WiFi netting $2,657. With their internet hire totalling $2,500, the income from the User Pays Guest WiFi network not only offset the costs of the event production internet but also made them a cool $157. The stallholders only paid for the internet they needed, keeping costs down for everyone and increasing the accessibility of the event overall. Here’s what Brian had to say about the experience.

“With the payment window on our WiFi system we recovered 100% of the costs of the PopUp WiFi services and we generated a modest profit on the WiFi. Combined with the reduction in staff labor and the peace of mind that having a fully functioning WiFi system with tech support adds, we really feel that we came out far ahead with our WiFi system this year.”