Make a splash with your event WiFi

Meet the smartest managed internet solution available anywhere in the world. With multi-carrier 5G + 4G bonded technology and 24/7 intelligent live management, it delivers seamless internet that can handle anything you throw at it.

Streaming in 4K? Easy. Working from a moving vehicle? Yep. Producing at an event with 100k guests? The Express 5G outsmarts it all, with 4 modems, an ultra-fast Peplink router and high-gain antennas to grab all the megabits you need.

From our base in LA, right across the USA. It’s total 5Genius.

Show me the packages

The NEW Express 5G. Not just a pretty case.

Meet the smartest managed internet solution available anywhere in the world. With multi-carrier 5G + 4G bonded technology & 24/7 intelligent live management, it delivers seamless internet that can handle anything you throw at it.

Streaming in 4K? Easy. Working from a moving vehicle? Yep. Producing at an event with 100k guests? The Express 5G outsmarts it all, with 4 modems, an ultra-fast Peplink router and high-gain antennas to grab all the megabits you need.

From our base in LA, right across the USA. It’s total 5Genius.

Show me the packages 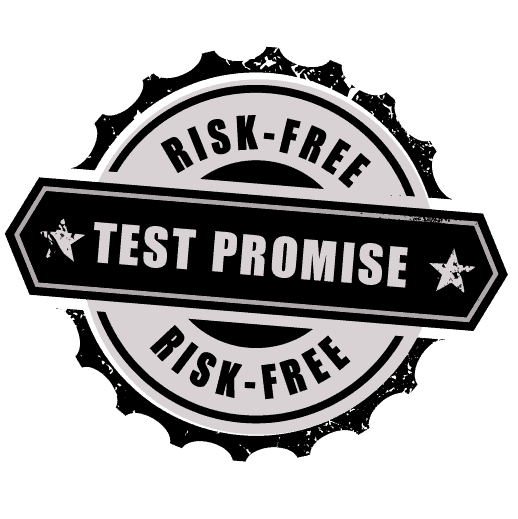 After eight years of development and testing and thousands of events supported, our engineers have thought of everything producers need and wrapped it up into one clever appliance. You don’t even have to open the Pelican case – just plug, play, produce.

With four modems bonding 5G and 4G, the Express 5G has the best throughput and most redundancy of any plug’n’play bonded cellular solution on the market. Use it for 4K + HD 1080p streaming and any production purpose requiring lots of bandwidth and reliability to succeed. We can even bond any on-site WAN you might have available for extra redundancy.

Featuring a top-of-the range enterprise-grade Peplink router, we’re seeing bonded speeds of up to 150 Mbps upload and 250 Mbps downloads (where local cell towers have the capacity available). With Forward Error Correction feature and live management, you’ll have all the grunt you could possibly need for a seamless stream.

Set your unit free from AC power with both Milwaukee and DeWALT battery capability (use yours or hire ours). Great for remote sites, moving vehicles and jobs where that power drop is taking forever! We’ve added an extra LAN port so you can hard line two devices directly into the unit as well as add any on-site WAN that happens to be available (not required).

Combines one 5G and three 4G(LTE-Advanced) feeds together with any available on-site WiFi or hardline connection for peak performance & uninterrupted transitioning between carriers. 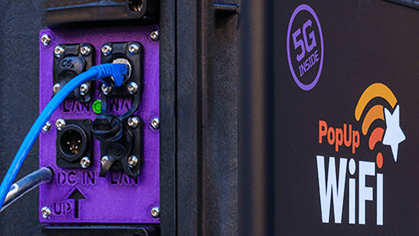 Two handy LAN ports to connect devices or switches via hard line.
Plus a WAN port lets you add any on-site connection to the pool for even greater redundancy. 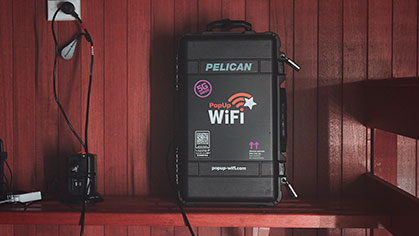 Planning something tricky, somewhere tricky? Run a test at your location ahead of time with full support from our expert techs. If it's not all you hoped for, we'll give you a full refund. 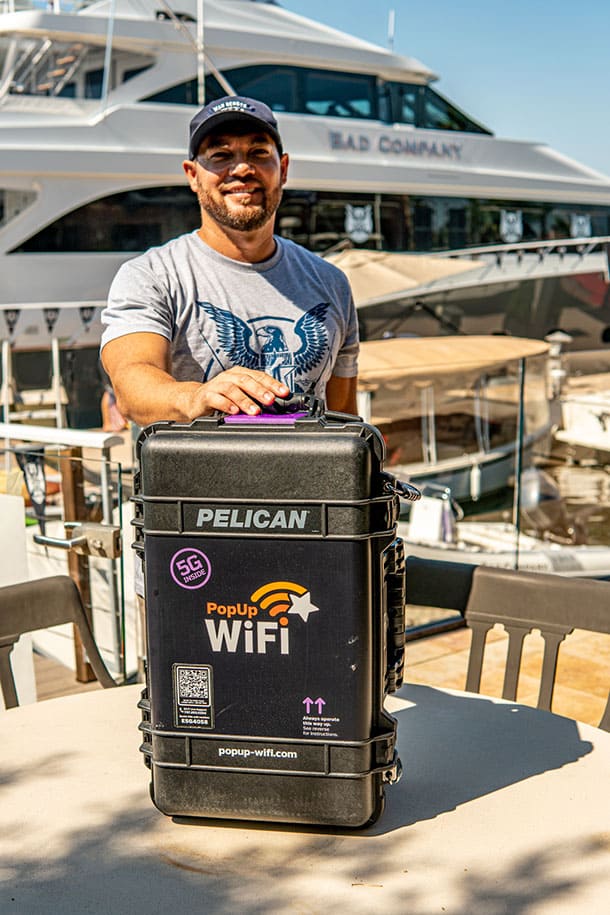 This is how we helped a Livermore Valley charity beat their previous year's fundraising figures in just 15 minutes.

Brandi from Livermore Valley Wine Foundation got in touch with us back in 2018 after her annual Charity event to raise funds for hungry kids in the San Francisco Bay area experienced a few unfortunate ‘hiccups’. The team had spent months planning a silent auction in their stunning wine cellar where over 500 guests would be invited to bid using a mobile app. On the big night, the MC announced the auction open… only for guests to find there was no cell coverage. No one could bid, no one could sell. At the end of an awkward evening, the charity only raised a fraction of their target – all because the internet failed.

After quick conversation with Brandi, we solved the internet problem in the wine cellar with managed internet for less than $900. Fast forward to the 2019 charity event and to her relief, Brandi set up the PopUp WiFi unit in minutes. The WiFi signal was strong and powerful. Thanks to the connections from AT&T, T Mobile AND Verizon – all bonded together through an enterprise-grade Peplink router, and to the 4 powerful High Gain Antennas inside the box, the site had both high bandwidth and ample redundancy. In stark contrast to the year before, Brandi watched the bids climb higher and higher as hundreds of guests used their cell phones to participate in the online bidding wars with glee. Credit card payments were processed quickly, money flowed easily. Best of all, her silent auction raised over and above that of the previous year, helping more children in need than ever before, all thanks to dependable managed production internet.

Turning your splash screen into a marketing tool is a great way to supercharge your temporary WiFi; creating brand presence and capturing critical information. Here’s a few examples from some of our clients to get your creative ideas flowing.

If you have any questions contact us and we’ll be happy to talk you through it.